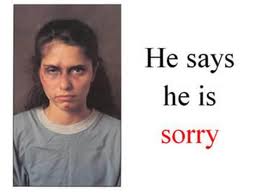 You don’t seem to understand repentance.

1. Repentance is not “I’m sorry that some of the things I said led people to attack me and that now I have to eat crow.” Repentance is being sorry for your actions, not for those actions’ consequences that now come back to bite you.

2. Repentance is also specific: you don’t repent of “some of the things that I may have said or done”. If you maligned someone in a public setting (like Meyer and Petry), it could mean using the same setting and declaring: “In 2007, I said such and such. I now understand this was wrong. I retract those words and want to ask the people concerned for forgiveness. Also, we excommunicated this person and shunned that family. That was wrong.” It would also mean asking the victims for forgiveness – which they would be free to grant or not – by acknowledging the wrongness of your actions and their hurt in direct communication.

3. Forgiveness can only be asked for, but never demanded. It’s the essence of forgiveness that it can only be voluntary, not coerced. The victims don’t HAVE to forgive when you ask them for forgiveness, even if I am sure most would forgive if they had the impression that repentance was genuine.

4. You can never ask all the people you hurt for forgiveness – there are just too many of them, many have never spoken up in public, and in some cases maybe did not even realise at the time just how badly you were treating someone. But you can at least try to reach the people hurt the worst and most publicly in person. That would still be quite a number.

5. Repentance is hard work – six weeks just will not be enough time..

6. It’s also not about “vengeance”, about your enemies forcing you to step down. But if you are really sorry for what you DID, and not only for the fact that your actions have come back to haunt you, you may come to the conclusion that in the light of your past behaviour and actions stepping down remains the only alternative to continuing a highly damaged “career” and – let’s for now call it that – “ministry”.

7. In all of the present situation, I feel really sorry for your family, your wife and his kids. It’s no fun for kids to discover that their parent is not only not perfect, but a lot less than very good.

8. I feel a lot less sorry for you than for your family. As the saying goes, “If you can’t stand the heat, get out of the kitchen!””, and while you were under the illusion that you were the chef in that kitchen, you stoked the fire and turned up the heat quite a lot.

9. You should really seek professional – not nouthetic – help for your anger issues

(Thanks for Gus who posted this on Wartburg Watch  Link )

5 thoughts on “An open letter to Mark Driscoll re: understanding repentance – from Gus”